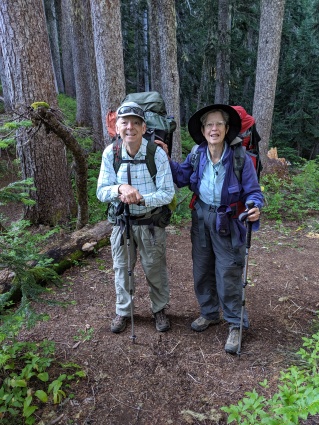 My backpacking challenge was accomplished!  But not quite as I anticipated.

I was honored to join the PassToPass.org on a Pacific Crest Trail backpack  and meet people both courageous and interesting:

Martha and John Carlin — After John got a Parkinson’s diagnosis in 2002, Martha started educating herself about the disease and eventually founded a company, The BioCollective, to research the human biome and help find a Parkinson’s cure.  She matter-of-factly told me,  “We collect poop.”

Steve Peters — With the slow, small steps of someone who has had PD for a long time, Steve persevered on the trail.  Perseverance even though his son (and support person) couldn’t get time off from work and had to drop out at the last minute.

Derek and Seth Torry — Derek, diagnosed at 40 with YOPD (Young Onset PD), and his son Seth were the wranglers for four llamas. 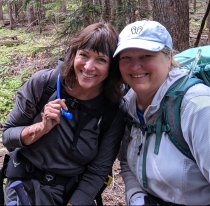 Lori and Laura still smiling on the trail!

Laura and Garth Hitchens — A bright, bubbly woman with an excellent first name, Laura got her diagnosis at 51 and is active in YOPD activities.  Her husband Garth came as her support person.

Lori Schneider — Her trail name is “Seven”.  Why? Because she’s summited the highest peaks on all seven continents — all with multiple sclerosis. 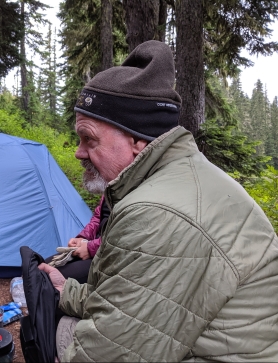 Bill Meyer at our campsite.

Bill Meyer and Mort — Bill is one of the founders of PassToPass.org.  Just a few days before this hike, Bill had the battery replaced (under the skin) for his DBS.  His doctor forbade him from carrying any weight, so Bill’s brother-in-law Mort stepped in to help carry Bill’s stuff.

And how did I fare?   After many tryouts, my fifth backpack, which I  borrowed from a friend (Thanks Jan!), fit me reasonably well.  The first day I had the luxury  of having the llamas carry my sleeping bag and food bag.  But after a sleepless night in a claustrophobic tent, I persuaded Paul to hike out the next day.  “I can do this, ” I thought, based on the information I had: 11 miles, all downhill. 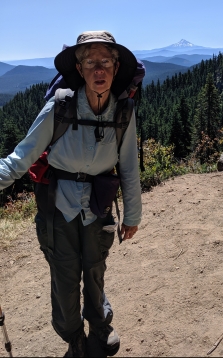 Note my weary expression and leaning posture, after about 3 miles of unexpected elevation gain. Mt. Hood in background.

Ha ha.   Much to my surprise, there was plenty of elevation gain and almost equally taxing elevation loss.  The “elevation loss” info I had was a net amount.  And the distance was more like 12 miles.  And of course, since we had separated from the group, we couldn’t make use of the llamas,  My handsome sherpa came to the rescue.  He was already carrying the tent, stove, fuel, cooking pot, and water purification.  He added one of the back chair pads and for the last three miles, he carried my sleeping bag in his hand.   And for the final mile, he came back to carry my whole pack.  What a guy!

So, not quite what I anticipated.   But hey,  three days’ distance in two days!  Guess I need to figure out a strategy how to sleep on the ground.

Laura woke up one morning in June 2012 and "as if by magic", her right hand was tremoring. Diagnosis: Parkinson's. Laura writes about Parkinson's research, Parkinson's people, and her own journey in her blog: "The Magic Trick -- Life with Parkinson's" (https://magictrickparkinsons.wordpress.com/).
View all posts by Laura Kennedy Gould →
This entry was posted in Exercise, Parkinson's People and tagged Bill Meyer, hiking, Martha Carlin, Pacific Crest Trail, Pass to Pass, PassToPass. Bookmark the permalink.

This site uses Akismet to reduce spam. Learn how your comment data is processed.