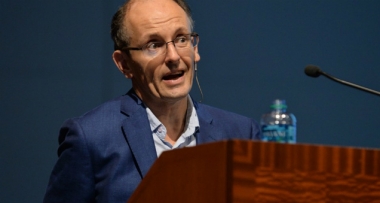 I just got word from my Canadian buddy and fellow blogger Natasha McCarthy that Tom Isaacs had died unexpectedly on May 31 at age 49.  Natasha and I had both heard Tom speak at the World Parkinsons Conference in Portland in 2016; I’d heard him at some other venues.  All Parkinsons conferences feature inspirational speakers, but Tom was, gosh,  pretty dang inspirational.  And he was hilarious!

Let’s see:  Tom got a diagnosis of Young Onset Parkinsons at age 26 in 1994.  He decided to raise money for Parkinson’s research by walking the coast of his native England.   Hundreds of miles walked by a guy with a movement disorder.  Along the way, he met his future wife.

OK, pretty impressive already, right?  But wait, there’s more.  In 2005, Tom started a whole new organization, Cure Parkinson’s Trust, with the goal of finding — and funding — a cure for Parkinson’s.  In 2016, the organization raised 2.03 million pounds for research.  Take a look at their 2016 report on their website for some pretty gnarly exciting research.

This little clip gives just a hint of the humor with which Tom spoke.  It also shows his extreme dyskinesia (uncontrollable movement) — uncomfortable to watch, but you eventually shrugged it off because you realized he ignored it too.  We’ll miss your humor and leadership, Tom, but “our eyes are still on the prize”– finding a Parkinson’s cure.

This site uses Akismet to reduce spam. Learn how your comment data is processed.